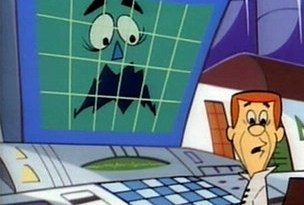 Did you ever watch the “The Jetsons” cartoon? If you watch it now, you may miss the imagination and innovation that were behind the cartoon that originally aired in 1962.  Let that sink in a bit.  1962.

So, this space-age family lives in an apartment that is elevated above the clouds, and our hero, George Jetson, works for Spacely Space Sprockets.  Most everything they do is accomplished by pushing a button, they have a robotic maid, and a talking dog.  Everything is convenient and time saving.

In thinking about the technology that the series introduced, I am amazed at how close we are to making many of the things we see in The Jetsons a reality.

Another thing that struck me was that the worst thing that happened to George everyday was being fired by his boss Mr. Spacely.  While this would send most of us running for the Prozac, George always ends the day with his job.

Spacely is always creating schemes to make more money and hopefully subdue his  competitor, Cogswell Cogs. So, when poor planning, and a total lack of thoughtful pragmatism, Spacely is left with a huge business fail, and George gets blamed.

So, for all the innovation and technology that was readily available to Mr. Spacely, I am here to provide a solution for Mr. Spacely’s business problems.  Thus, saving George Jetson’s job permanently.

I have to assume that since Mr. Spacely never had a business idea that worked, that there was a huge lack of understanding with regards to his current production operation.  He lacked the tools to have visibility for better decision making.  Mr. Spacely needed Infor SyteLine ERP manufacturing Software.

SyteLine would provide Spacely with all of the following:

You see, Spacely made the mistake of ignoring his core business. Instead of focusing on how he could improve his current operations, he continuously tried to reinvent his business.  How often have we seen that happen?  A company has the ability to produce a product just outside its core competency and the next thing you know, they are sinking resources into it.

I believe that Mr. Spacely was working off a legacy ERP system.  Something he could have acquired in the 1990s and never upgraded.  This is true for many manufacturers right now.  Legacy ERP systems are actually holding some manufacturers back.  They are running a 21st Century production line off of 20th Century data.  Purchasing, inventory, order management, and scheduling are lagging behind the sales cycle, causing deadlines to be missed, and concessions are made.

Doesn’t seem very 21st Century-like to me.  We’re in the age of huge technological growth.  We’re supposed to be working smarter…..not harder.

Previous PostTwo "Must-Have" Tools To Create Iconic Furnit...
Next PostTo Be Or Not To Be, That Is The Question....